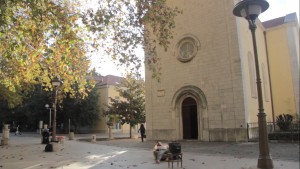 Inability of action is a documentation of a performance in which artistwishes, through his inaction, to bring closer to us the existential nature of the artists’ present attempts at action as an act of fighting. Therefore, he also wants to express in a symbolic way the attitude of a modern individual towards the social environment in which he as a responsible social individual should impose himself with a clear voice and attitude. The performance is in the form of a short video and the artist attempts to bring inaction to a higher level, to demonstrate his inability to act to a larger group of people who should perceive the situation and react to it, but they fail to do so.It creates a certain vacum while the picture of reality imposed through the medium of television as a medium creates a cocoon, a paradigm which actually does not allow you to react